“What good fortune for governments that people do not think.” – Adolf Hitler

In humans, there has always been an intrinsic struggle between the self and others. We must be able to maintain a distinct self-identity while at the same time be able to fit as one of the innumerous cogs of society. Because of this need to fit in, over the course of history, the actions and thoughts of the public have been hijacked many times to make them pliable under the will of their governors.

The idea of government and other governing institutions is to consolidate decision-making power into a central body so that the citizens are able to free their hands to do other things. However, this opens up the door to complacency where the public would rather not worry about the finer details of policy and lawmaking and doesn’t take notice before it’s too late.

There are several ways that we can be told information that is clearly wrong but we still believe what’s being said. In this first part to this month’s study piece, we’ll look at some of the ways that we can be suggested to second-guess our own thoughts, focusing on what we know so far from psychological studies.

First, we’ll start off with a well-known experiment:Asch’s Line Experiment. In it, a group of students were asked which line (a, b, or c) most closely matched the length of the original line. 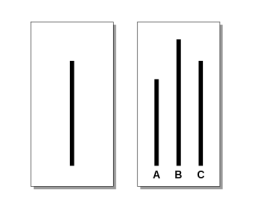 Now imagine this scenario playing out in the real world with much higher stakes. This has happened many times throughout history. Ultimately, this study was done to gauge the level of conformity that we display in a group setting. In other words, this study demonstrated the power of normative social influence over our public actions: when others believe one thing or perform one action, we are more likely to also believe that thing or perform that action even if it’s against our values.

This sort of conformity is also why a person’s vote is kept confidential. Otherwise, their vote may not stand for what they truly believed in.

To more aptly illustrate, this is a famous poem called First They Came… by Martin Niemöller, a pastor and Nazi concentration camp survivor:

First they came for the communists, and I did not speak out – because I was not a communist;

Then they came for the socialists, and I did not speak out – because I was not a socialist;

Then they came for the Jews, and I did not speak out – because I was not a Jew;

Then they came for me – and there was no one left to speak out for me.

Inaction in a time of crisis is just as bad as having committed the crime itself.

On the other hand, we also have informational social influence. This type of influence is in how willing we are to accept the word and instructions of a person who seems to know better. Whereas normative influence comes from a person’s desire to be liked and accepted, informational influence comes from a person’s desire to reflect what seems to be the correct behavior or belief. This occurs more when the person in question doesn’t know what to do in a certain situation. This type of influence is partially why the bystander effect exists where since no one else if doing anything to help a dangerous situation, you as an individual are less likely to help as well. This is also why children in cults can be taught to hate things and people they’ve never seen and to fear things that they don’t even know. If it’s an adult or some other authority figure speaking, then it must be true because they know better.

That is simply not true.

Don’t give up the burden of individual thought just because you’re tired and don’t know who to believe anymore. This is the time when you need to think for yourself the most.

In part, this submission to peer pressure is evolutionarily hardwired into us so that we don’t get ostracised by the social group that we belong to. In the wild, this promotes our ability to survive by creating a like-mindedness among the members of a group so that everyone works better together. However, this also means that we are more likely to stay silent when we do see something that goes against our values especially when whatever’s happening doesn’t directly affect us.

Obedience to an unsavory cause can stem from many reasons even when the person knows that what they’re doing is wrong. Most come from fear.

First, we’re going to look at another famous study: theMilgram Experiment. The experiment revealed the willingness of participants to harm another human being under the orders of an authority figure.

For brevity’s sake, this video helps illustrate both what the Milgram Experiment was and how it relates to this month’s topic (be warned: there are segments of original footage from concentration camps as well as the experiment — viewer discretion is advised):

Under the pressure of authority, even the ordinary, compassionate citizens would be willing to do great harm to others, sometimes with great conviction.

Everyone knows the saying, “Power corrupts” and science can prove it. The first study we’re going to bring up is Professor Zimbardo’s infamousStanford Prison Experiment.

If you haven’t heard of what the experiment is, please watch this introductory video (that I found on YouTube):

In it, we saw how students who by all accounts were outstanding intellectuals at Stanford University turn into the abusive and abused that we hear about from news stories to the point where, to the students’ safety, the experiment had to stop at six days. All it took was six days.

The whole point of the experiment was to understand the developments of norms as well as the effects of labels and roles on people and their behavior. What we see that it only takes very little time for anyone to degenerate into a state of suspended morality.

It’s so easy to become used to ever-escalating levels of shocking events especially when the events separated from you by barriers. A different race, a different place, other humans. It shouldn’t matter who is suffering because of our actions. If it was happening to you, you would want others to stand up for you so why should you sit idle when it’s happening to others? This includes criminals, people who come from other lands, and those that aren’t able to speak for themselves (those with disabilities, mental conditions etc.).

If it only took that much time before bright, young college students who didn’t have any external pressure to perform as inhumanely as they did (they didn’t have any real benefit from treating fellow students like crap), then what would happen if we happened to live in a world where we thought we were the policemen of the world, that our way was the right way? We would adopt that role and grow into it, imposing our views, our values and our needs on others, thinking that since we know better, everyone else is better off doing what we think is best for them, never entertaining the idea that, just maybe, we don’t know better and it’s better that we don’t play God with the rest of the world. It’s easy to say that another Holocaust/Trail of Tears/Rape of Nanjing/genocide won’t happen to us or our country nowadays but at the same time, those that came before has demonstrated again and again that it is possible and might possibly happen again.

A very effective way to squash a person’s conscience towards crimes committed or views held is to rationalise what is being done. Often, arbitrary standards are used to measure the victim to dehumanise them and make them a being that we can’t relate with and therefore don’t feel bad if they’re hurt, tortured or killed (includes mental and emotional hurting, torturing and killing). This is all to ease our cognitive dissonance and acts as a defence mechanism because no one likes to think they’re bad people doing bad things.

Rationalisation is the same as lying to yourself to justify your actions. It’s obvious to see with alcoholics and other addicts but it’s not so easy with yourself. This can take form in the associations we make to the people we hurt or through “alternative words”. This can be seen in the doublespeak-like fashion that we use to term unpleasant things. This might be euphemisms that we hear in day-to-day life or we might it hear it on the news and from our policymakers where concentration camps are referred to as “tent cities” and concentration camps for young children are called “tender age shelters”.

Other ways that people ease their cognitive dissonance is to victim-blame. Is it the victim’s fault for carrying their wallet in their back pocket when he gets pick-pocketed? People like to believe that bad things don’t just happen for no reason and that bad things won’t happen to good people. Rationalisation comes after the fact so many justifications didn’t apply at the time the event is happening. In other words, we make up faults in the other person to make it seem like the other person deserved it. It takes a very introspective person to recognise when they’ve been rationalising their actions and it takes a strong mind to own up to any actions they weren’t proud of.

In total, we will have three parts to this month’s study piece. We will, for the most part, focus on WWII and in particular on Japan and Nazi Germany. In the second part of this series, we will look at how the Japanese, who are normally a courteous and honor-focused people, managed to commit evils on par with and beyond those committed by the Nazis under Hitler’s rule. The third part will, then, be focused on Germany during WWII. Overall, we hope that by analysing these two instances of hate and unspeakable violence, we are better able to understand and recognise the very symptoms of intolerance and detached morality that led to what happened and prevent it from happening again today.

The Obedience Studies at 50

Post Hoc Rationalisation – Reasoning Our Intuition and Changing Our Minds

Framing as a Propaganda Prop

The Hangman | A Poem

One thought on “Our Sunken Place |July Study Piece Part 1: The Psychology”