Today, we’re talking about sound and the reality of things. You may have noticed that I’m super into quantum mechanics and I’m continuing the exploration of the quirky side of reality in this article so buckle up and prepare to have your mind blown.

First off, what is sound? It is vibration. It is a result of molecules bouncing off each other violently. That’s why lightning produces thunder. The flash of high heat is so quick that the heated air around it has no time to expand. So the air compresses around the lightning bolt, raising the air pressure around the area up to 100 times the normal level and causes an explosion of air molecules away from the source in the form of a sonic wave. Our ears pick that up in the form of vibrations that shake our eardrums and this vibration travels through our ear to the brain, where it is processed into sound. 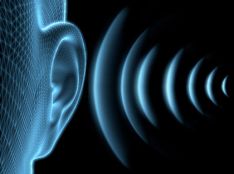 We don’t usually think of our hearing as we think of our vision, that is, being indispensable. On debate.org, sixty-one percent of the participants when asked if they’d rather be deaf or blind said that they’d rather be deaf. This sort of underestimation of the effect of sound is understandable; in fact, it has been said that ninety percent of information entering the brain is visual (not a verified fact) and somewhere around half of our brain’s neurons deal with vision in some way. But sound is more than just our never-sleeping sense, it is the fundamental nature of reality.

Sound has some very real applications in our technologically advanced world. Sound can be used as the replacement for our sight in the form of echolocation and our militaries use sonar and radar to see things that we can’t perceive using our eyes. We can use sound waves to perform high-risk surgeries with minimal invasion on the patient’s body. Ultrasounds also made mothers’ lives easier by letting them see their babies before they’re born. Sound is undervalued as a phenomenon of nature but it is quite useful. And that’s not counting what our ears do for us every single day.

But with the discovery of cymatics and the invention of the cymascope, scientists have found more reasons why sound is awesome. Cymatics is, according to Wikipedia, is “a subset of modal vibrational phenomena.” Basically, it’s just how sound can be visualised using physical things, like sand or water. The Featured Image (not mine) above shows some of the results of cymatics in the medium of water. Here’s a video:

So what’s the big deal? The big deal is that sound can somehow affect the nature of things. It can arrange matter into certain repeating patterns and change their nature to match the vibrations of sound. This sort of natural geometry in sound is way too neat so there must be something else to sound right? Yes. Let’s take a look at string theory. String theory is one of those quantum mechanics things that are waaaay beyond anyone’s understanding because 1) we can’t see or feel it, 2) it’s super wacky and 3) well, here’s the introductory page from String Theory for Dummies. The underlying theme is sound. If string theory is correct and it unifies the four forces of the universe (gravity, strong and weak nuclear force, and electromagnetic force), then that means that the vibrating strings that make up the theory is controlled by sound (in this case, vibrations, which is basically the same thing but sound is a human, or rather, an animal condition–more on that later).

Think about it. Everything in our universe, the nature of every single atom and particle, the reason why an electron is different from a photon, is because of the ways these strings vibrate. In fact, everything has an acoustic identity or as it’s known, resonant frequency. The reason why glass breaks if you play a certain frequency (aka note) at a loud enough amplitude (aka volume) is because that “certain frequency” is at the frequency that the glass vibrates at and by matching that frequency, the glass will start to tangibly vibrate. And by increasing the amplitude of the vibration (increasing the volume), the glass will try to vibrate at a much faster rate than the material of the glass can handle and thus, shatters. Here’s a visual demonstration:

This resonant frequency exists in everything: your car, your house, your head (looking at you, Sindel from Mortal Kombat), and by extension, you can destroy anything you want if only you can produce the sound needed. If you’ve watched Darker Than Black, then you’ve seen an example of how this method can be used to kill people too.

So sound is not just something that is merely convenient if we want to speak to someone, it can also explain the physics of the universe. Well, I say sound but it’s actually vibrations. Like I said earlier, sound is an animal “condition” (not sure if that’s the right word) because sound is just vibrations that our brains have processed. It’s like looking at the world through a digital camera; the image on the screen isn’t actually what’s really there, it’s just the camera’s rendition of what it sees. Anyway, enough with the metaphors. This is a slightly shorter article than usual but I hope you have found it informative and interesting all the same.

As always, like if you’ve enjoyed it, follow, all the usual stuff. And I’ll talk to you later.

Here’s a link to a documentary that will tell you more about sound.

One thought on “Sound: The Secret Nature of Reality”