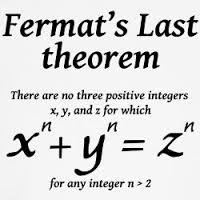 I finished reading The Girl Who Played With Fire a couple of weeks ago. I really liked the book, but the big ham about women being underrated in their careers was focused on way too much (the same happened in The Fountainhead where the big ham was about how communism and conformity are the worst things ever and God help you if you support socialist ideas). In any case, after finishing the book, there was one thing that remained on the back of my mind. It was Fermat’s Theorem that was introduced early on in the book. I haven’t read the third book yet so I haven’t been given an answer by Lisbeth herself (if she gives an answer in the third book).

I was actually trying to figure it out. Since she said that Fermat’s Theorem was less about math and more about philosophy, then that means the answer isn’t supposed to be a supposed proof of the theorem but rather what it means in relation to the theme of the book. So I tried searching up the actual proof of the theorem and along the way found that there was a proof to the theorem (Wile’s proof) and that it was of no help to me. That was a dead end for me. So what did Lisbeth mean by it being philosophical?

Of course, Lisbeth would know very well what philosophical meaning there is behind something that people try to categorise and classify, but whatever name or condition they come up with to describe it, they just aren’t true and they don’t fit. Like Wile’s initial proof, people’s assumptions and expectations of her are often based on mistaken premises and false facts. Furthermore, since the theorem states that the formula Fermat came up with has no solutions, people trying to come up with a proof has to prove that there are, in fact, no solutions which means that they have to exhaust every means of finding a solution that solves the equation. Lisbeth, in all her peculiarity, has nothing of the conditions that her foster parents and her psychologists attribute to her, but they keep trying to cure her of the things that she doesn’t have. And like the theorem, Lisbeth is hard to understand and her behaviour is hard to prove and disprove and that means that once rumours establish themselves, her peculiar behaviour is hard to explain if one doesn’t know the context and that leads to much of her bad publicity in the book.

And that’s it. That’s why Stieg Larsson decided to include the Theorem in his books. To the people who published his story of Lisbeth Salander after his death, thank you for not including the answer to the question in the second book. I’ve had a bit of fun with this, but I did get frustrated when I didn’t know what Lisbeth meant while I was still reading the book (hence the title of this post). Only when I’ve had time to think things through weeks later did the answer come to me. Hopefully, I’ll be able to get my hands on the third book sometime this year and finish the series.

That’s all for this time. Read on!

To read more about Wile’s proof, here is the Wiki page for that: Wile’s proof of Fermat’s Last Theorem